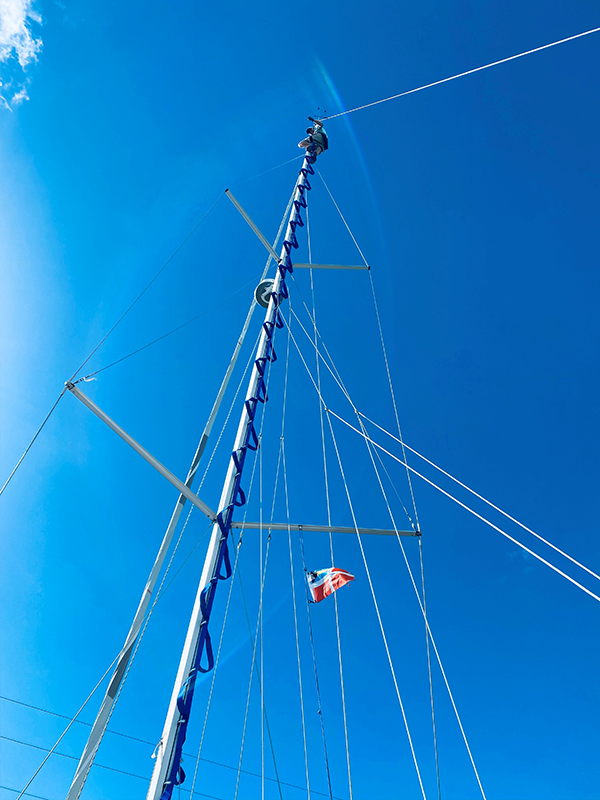 I went up the mast using MastMate today, in order to repair the wind speed indicator.  Here are my takeaways:

1) Ascent was much faster than using prusiks or a jumar, and did not require any winching.

2) The battens in the top steps made it easy to stand and get the work done.

3) I used the MastMate work belt to carry tools and a retrieval line in case I needed to haul up any additional tools or lower the MHU prior to climbing down.  The strap around the mast provides a secure brace while working.

4) Next time I will probably use a chest harness clipped in to the halyard safety “belay” just in case I lost a grip on the steps above while climbing (avoiding a potential “topsy-turvy” situation.

Overall, a great product that will be my gold standard for ascending the mast from now on!

I had a couple of difficulties.

One:
It was only just long enough – had to position it very carefully to be able to get to the first step from standing on the mast winches, and having the top step high enough for removing the backstay. I think I’ll add a couple of folding steps at the bottom.
Two:
Although I could raise my foot enough for each successive step I had some difficulty getting my foot far enough back to not push the step up with my toe. Once I had raised the step this way I had to go down a couple of steps to push it down and try again. I had to lean back somewhat to get my toe to clear the step, and that was a little scary. My inseam is not particularly short, I could certainly be more flexible.

I thought that the clips holding the webbing to the mast slides seemed a little flimsy, and I shall probably whip them on.

I discovered that light shoes (rather than boots) and shorts (rather than jeans) helped, and I finally succeeded in getting to the top and removing the backstay.

All in all I am very pleased with the Mast Mate.
The Workbelt was marvellous. Being able to use 2 hands for work and still be secure was great. 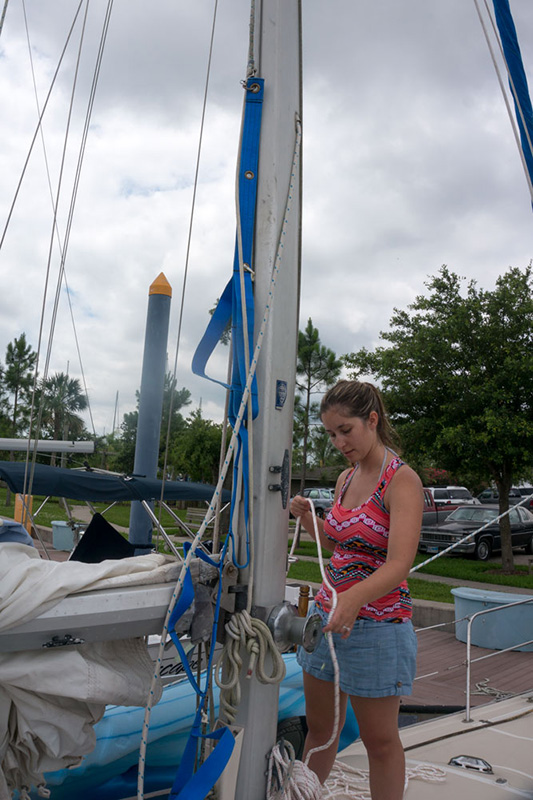 Yesterday I broke out my Mast Mate for the first time. I have been up the mast many times using ascender climbing devices, the ATN Mast Climber, and having someone hoist me up on a bosun’s chair. Of all the methods I prefer the Mast Mate to the others and here’s why: using ascenders are just too dangerous, the ATN Mast Climber requires too much exertion, and I would rather rely on myself than others to get up the mast. Besides, I am frequently alone when I have to ascend. Yesterday, I made three trips to repair my wind sensor; the cups on the anemometer required replacement. I thought I could replace the cups in place on the mast head, but no, I needed to bring the entire sensor down, and make a trip to West Marine. I would never have been able to make three trips with the ATN. I am just too old. I could have climbed the Mast Mate at least one more time.

My only criticism is if I had to perform a lengthy repair, say thirty minutes or longer, standing on the top steps would be uncomfortable. Instead I would wear a harness and secure it to a second line with an ascender.
Sincerely,

Hey Gary, Justin from Buffalo here. I finally hoisted the mast mate I purchased from you on eBay earlier this year. Boat went in 5/15, only days after the ice finally receded on Lake Erie. Installed my new anemometer and flag halyard on right spreader successfully, and felt very confident going up and working aloft. As the boat has an in-mast mainsail furler, I raised the mast mate on an external emergency slide track using the boom topping lift, and used the jib halyard as a 2nd safety tether along side the work belt. Thank you for your fine product. Several folks stopped to ask about it. Please feel free to post or use pics in any way. Respectfully and appreciatively,

It took a while to get a picture of me climbing the mast. I’ve been up now at least 10 times and it is a breeze. Your Mast Mate made my wife’s life and mine so much easier. We are sailing our Spencer 48 double / single handed.

Thank you so much! Marco

Got the Mast Mate a couple weeks ago and finally put it to work.

We added a Cradle Cover from Doyle Sails to our boat and I had to go to the 2nd set of spreaders to put pad eyes and blocks in for the lazy jacks.  While I wasn’t at the very top or waving, this was the pic my wife took.  Very comfortable working up there.  The harness and pouch worked well, holding me and a portable drill securely.

We were still on the hard in the marina.  People would walk by and shake their heads.  Cathy told me they were shaking them because they said THEY WOULDN’T be up there.  One guy asked about it and I said it was safer and more comfortable than a bosn’s chair and you don’t need help.  We had a couple chairs in the past and always had to recruit deck apes to hoist me up.  I had sent my daughter up once and wished I had an assistant ape!

Great product.  Quality built.  Well worth the money.  Cathy said it paid for itself already.

A bad day on the boat, is better than a good day at work!
Dave

Here are the pictures you asked for.   Your product did it’s job great!   Even though there were 13 to 18 knot winds that day the climb was easy and I felt secure the whole time.    Thanks again and I am sure you will have continued success with this product.

Gary
The mastmate arrived and I put it to use Sunday. It worked great, I am very happy with my decision to purchase.
Regards
J